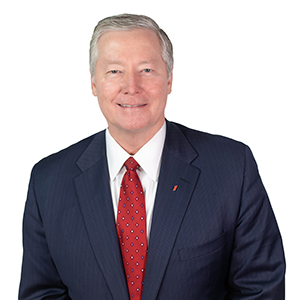 ABILENE, Texas, January 5, 2023 – Ron Butler, a 30-year veteran at First Financial Bank, will be inducted into the Texas Bankers Hall of Fame in April on the campus of Sam Houston State University, the university announced this week. One of five honorees in this year’s class, Butler currently serves as EVP/Chief Administrative Officer of First Financial Bankshares and Chairman and CEO of First Financial Bank’s Abilene Region.

"We are so excited that Ron is receiving this well-deserved honor because of his exceptional leadership, banking acumen and strong relationships with our customers, employees, and the banking industry, as well as the communities we serve,” said F. Scott Dueser, Chairman, President and CEO, First Financial Bankshares. “I speak for everyone at First Financial when I say we are so thankful for the outstanding job that Ron does to make our Bank one of the top banks in the country and we are grateful to Sam Houston State University for recognizing him with four outstanding peers in the banking industry.”

During his career with First Financial Bank, Butler previously served as CEO of First Financial Bank in Eastland and Stephenville. He has been active in the community, serving on numerous community boards, and is the former board chair of the Abilene Industrial Foundation and Abilene Chamber of Commerce. Butler also serves on the Advisory Council of the Excellence in Banking program at the Rawls College of Business at Texas Tech University and the Advisory Council of the Rawls College of Business (Emeritus). He is former director of West Central Texas Municipal Water District, board chair of ContinueCare Hospital at Hendrick Medical Center, and the Abilene Improvement Corporation. Butler also served a six-year term on the Brazos River Authority board of directors and was appointed by Governor Rick Perry and has served numerous terms as a director of the Texas Bankers Association.

“To be honored alongside these four outstanding bankers is humbling and I am appreciative to Sam Houston State University and the Texas Bankers Hall of Fame for this honor,” Butler said. “Any success I’ve experienced during my career can be directly attributed to my First Financial teammates, customers, and communities with whom I’ve had the pleasure of working.”